Today I’m here to talk to you about what a reaction looks like. This is a post I’ve debated writing for a long time. It’s really personal and it’s really hard to relive. I’ve also feared being judged for writing about it. What ultimately has me here is that I know that so many other stories and messages helped us make the right decision and ultimately saved Ollie’s life. Messaging about epinephrine use and reaction response from organizations like FARE, Red Sneakers for Oakley, End Allergies Together, and Elijah’s Echo (just to name a few) are forever engrained in my mind and surely helped us. If our story can do the same for someone, it’s worth it.

Just over a month ago, Ollie had a mystery reaction. We went out to dinner, which we do from time to time. We did everything by our book. Ollie had food from home. All food he’s had before. At the restaurant, we wiped down the table (including underneath it), his chair, and anything else he might touch. After dinner, Erik and I wiped ourselves down as well. Our meals included cheese and perhaps egg in the burger buns. We don’t have Ollie’s allergens in our house, but we will eat them around him from time to time when out.

This has always worked for us. Ollie plays in shared spaces with no issue. He traverses playgrounds with no pre-wiping (and with far more face touching than I’d like). When we finished dinner that night, we ventured outside. The restaurant we were at had a garden and goats. Ollie happily wandered around. He looked at the goats, but never touched them. We next visited and ran around the tennis courts as we continued to explore the grounds. As it got dark, we headed to the car to go home.

That’s when it started. As we were loading Ollie into his car seat, he began to cough. Ollie has cough variant asthma, so a bit of coughing after running around isn’t uncommon for him. We gave him his water. The sip of water did nothing. We reached for his inhaler but never actually gave it to him.

In a matter of seconds, Ollie’s cough was almost non-stop. He was panicking too. Panicking in a way I’ve never seen before and could never imagine for a three-year-old. He clutched at his chest and screamed it hurts. His entire body was shaking. He gagged once and screamed he had to go potty. We whisked him out of the car seat and administered his EpiPen as he sat on Erik’s lap in the trunk of our car. As he was wheezing with his cough, we gave him his after inhaler too.

As I held Ollie, Erik called 911. I walked back and forth on the sidewalk, snuggling Ollie, and trying to help him calm down. Firetrucks and EMTs arrived quite quickly and from there we were transported to our local hospital.

For the most part, everyone we encountered was great. Ollie’s symptoms were resolved before any first responders even arrived. One firefighter started to question us administering the EpiPen and Ollie’s allergies in general, as Ollie “had allergies but hadn’t had a reaction in over a year.” This was his statement after Erik and I answered some of their questions. To be perfectly honest, I let him know it was exactly what Ollie needed and just focused on Ollie, who was quite overwhelmed with all the people and talking. This same person said that when the ambulance arrived, they would assess transporting Ollie. I clearly and politely let him know that Ollie’s emergency response plan included transport to the hospital for observation after a reaction, always. This is because of the risk of a biphasic reaction. This same risk is why you always carry two epinephrine auto-injectors.

I don’t share all of this to shame this person. That night was such a blur, I could not even pick him out of crowd right now. I share it to highlight the importance of knowing your child’s emergency care plan. Never be afraid to advocate and speak up. I’ve read stories of really scary and incorrect medical care when it comes to allergic reactions. I’d love for everyone to be an expert, but that’s not the reality right now.

To keep it in perspective, I try to think of it this way: How much did you know about food allergies before you were thrown into this world? Probably not much. We had plenty of first responders tell us we did the right thing that evening. I hope that my responses to the one firefighter taught him something new about food allergies. On my wish list of long-term plans? Visit all the fire and police stations in our area with a copy of FARE’s Food Allergy & Anaphylaxis Emergency Care Plan and answer any questions they have.

We live and breath food allergies every day. To be honest, this reaction was easy in terms of decision making. Everything changed so quickly, it was clear something was really wrong and epinephrine was needed. Even so, for a split second, I was unsure about using the EpiPen as I ran through the evening in my head. Dinner was almost 45 minutes ago, it was all safe food from home, we cleaned everything really well… how could Ollie be reacting? Should we really give epinephrine? 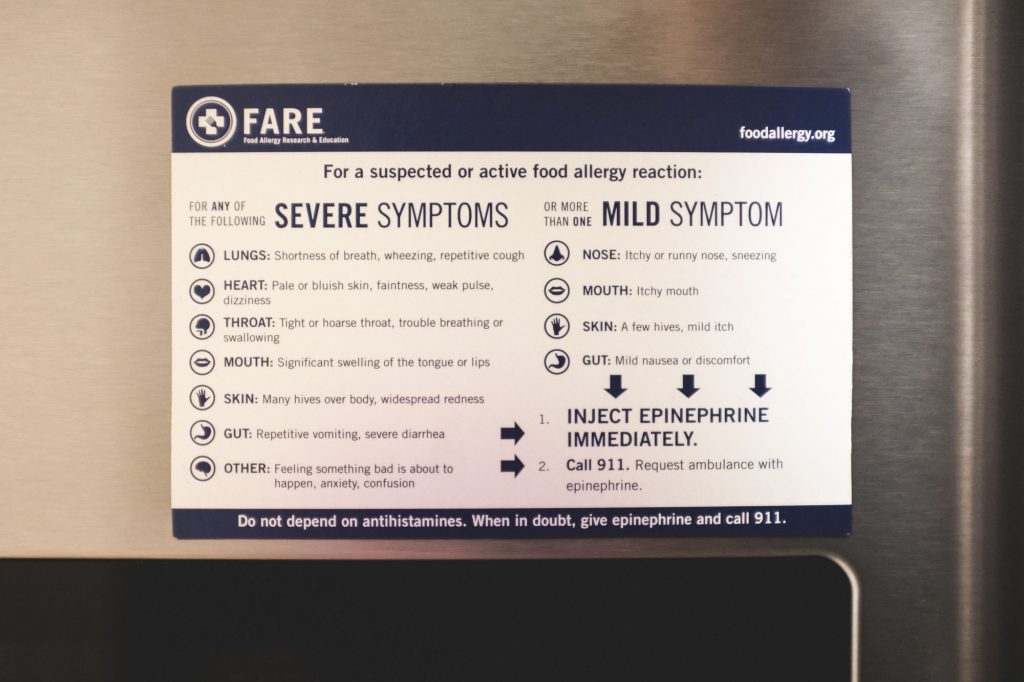 That question really was a split second. It’s human nature to not want to hurt your child. In that split second, I was scared of the pain Ollie would experience when being injected. Everything else we knew far outweighed that question. Looking at the signs and symptoms, Ollie had a lot of them covered: a repetitive cough, wheezing, nausea, and a feeling that something was wrong.

Ollie remembers this reaction far more than his others. He knows that poke hurt. He tells us he cried. We acknowledge all of this, let him know that it’s totally OK he cried, and that we’re really happy the poke helped him. A full reaction aftermath post is coming for you sometime. This one has impacted all of us more than his others, but I’m so thankful it had the outcome it did. I share all of this to hopefully help someone. We are all always learning.

When Ollie was younger, he had a reaction and we didn’t use epinephrine when we now know we were supposed to. Ollie was really little and had eaten a few bites of scrambled egg for the second time. He got a few hives on his face while eating, so we wiped him off and ended the meal. Almost four hours later, he woke up vomiting. That was the second symptom and we should have administered epinephrine. After much deliberation with the on-call pediatrician and a 911 dispatcher, we ended up at the hospital, but still never gave epinephrine. It was only after when reviewing this with his allergist did we learn we should have.

What I’ve learned on this food allergy journey so far is that no two reactions are alike. Some say that each reaction can be more severe. I’ve even read studies that reactions vary by the food. No matter what the case is, epinephrine is the one and only defense against anaphylaxis and an allergic reaction.