food challenge: temporary success and what we learned

I received a lot of really positive feedback on my post about our baked egg food challenge. Today I’m sharing about our second experience, a baked milk food challenge. The build-up was exactly like baked egg. We were sent a muffin recipe to prepare ahead of the appointment. There were for sure even more nerves going into this appointment having already experienced anaphylaxis with baked egg.

We arrived in the CAT-CR first thing in the morning. For this food challenge, we were in a curtained off area instead of our own room. It kept us closer to the nurses’ station given how the last challenge went, but I missed the privacy of our own room. There is only so much you can do to keep a toddler contained without a door to shut. Thankfully, there was construction happening at the hospital. That kept Ollie interested (and still) for a long time. We also read lots of books, played with toys from Child Life, and at one point had a blanket on the floor. 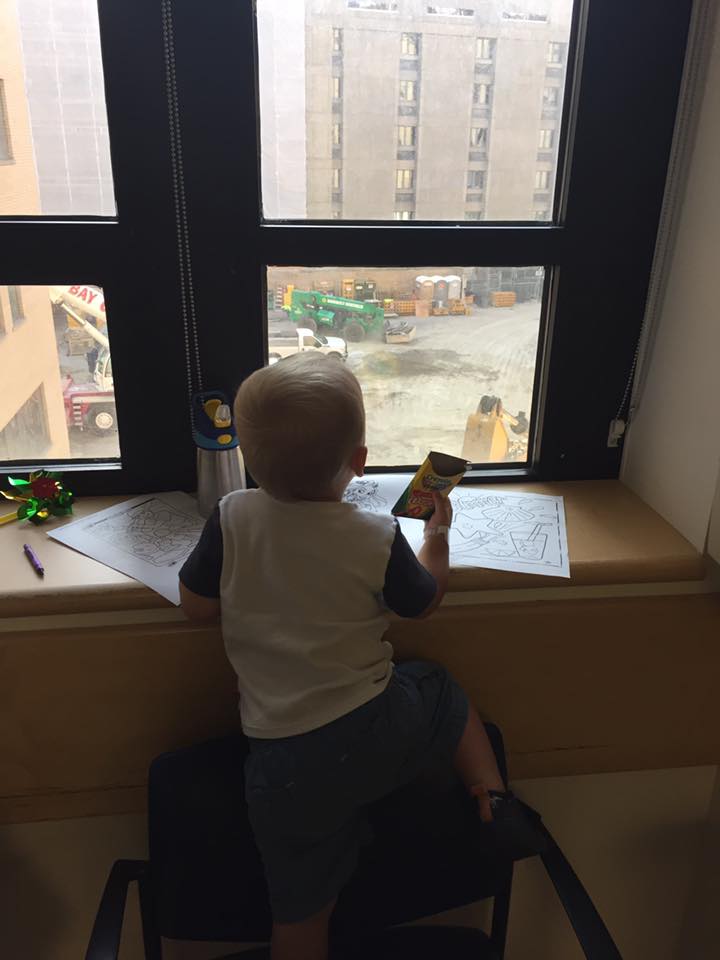 I’m going to fly through this food challenge because guess what? He passed. Our little man ate a full muffin without so much as a single red spot. At the end of the baked milk food challenge, I had to keep myself from crying happy tears. Some of the nurses from last time remembered him and stopped by to congratulate us and high five Ollie. We were given a big stack of paperwork and sent on our way. I remember reading the list on the way home. GOLDFISH. After a certain amount of time, Ollie could try goldfish. I don’t know why but that snack really stuck out to me. I think it just seems like such a quintessential kid food. He would get to have a “normal” food!

Did you catch the “would” in the sentence above? At this time, Ollie is not ingesting any milk, not even in baked form. Given Ollie’s history of delayed anaphylaxis, we were pretty on edge the afternoon after his challenge. We even set alarms to check him periodically throughout the night. He was totally fine. We got up that Friday and planned to go to storytime at the World’s Only Curious George Store before meeting with our GI doctor at MGH. We gave Ollie his next muffin in the room and continued getting ready for the day. He scarfed down the whole thing.

Within a few minutes of finishing his breakfast, Ollie coughed. It wasn’t a crazy, scary cough, but he for sure wasn’t sick. My husband and I looked at each other and gave the “this isn’t good,” look. I remember checking Ollie top to bottom for hives; there were none. I can’t tell you the exact timing of all of this as it is a bit of a blur. We called the on-call nurse and checked in: just cough, no other symptom or systems, no need to epi, continue to monitor.

Whether or not we wanted to admit it, I think Erik and I knew that things weren’t going to be good. We decided that we would grab our backpack and head towards the hospital. If things didn’t progress, we could get a coffee and attend storytime. My guess is you know that wasn’t the case.

When we go to Boston Children’s Hospital, we stay at the Yawkey Family Inn. According to Google Maps, it is an 11-minute walk. I’m a fast walker. I know we regularly do it in under 10. The brief discussion we had that lead to the decision to start walking was, it’s a weekday morning in Boston. Rush hour traffic is such that if we do need to give epinephrine and call 911, an ambulance would likely take more than 10 minutes to get to us. So into the stroller went Ollie and off we went.

In the time that it took us to get to Longwood Ave, Ollie had progressed. His cough was almost constant. I dialed the on-call nurse again as we picked up the pace and essentially ran towards the hospital. I didn’t get right through to a nurse that second time so we were about to cross the street when she called back. During that time, Ollie had developed a really stuffy nose and near-constant sneezing. The second the nurse heard that she let us know it was time for epinephrine.

I explained where we were and she said to just head right in. We crossed the street and ran through the doors of the hospital. Thankfully, the Emergency Department is right off the entrance. I’d imagine we must have been quite the scene. Me, on the phone, tearing up, constantly leaning into the stroller to get a close look at Ollie. Erik trying to run, push the stroller, and not take me out as I checked Ollie. By the time we got him out of the stroller and to a doctor in the hallway (this was probably about thirty seconds, but it felt like an eternity), Ollie’s face was swollen and he had started wheezing.

We were whisked into the first open room and a nurse gave Ollie epinephrine. They immediately gave him a fish mask (oxygen and albuterol), which he thought was cool. The EpiPen resolved his main symptoms within minutes and Ollie quite quickly got over the big shot. I think this time he was fine as soon as he got to put a band-aid on “quarter boy,” aka Corduroy, a stuffed animal he had received the day before as we were leaving the baked milk food challenge during some sort of party. During the ED stay, he also received an antihistamine and a steroid. 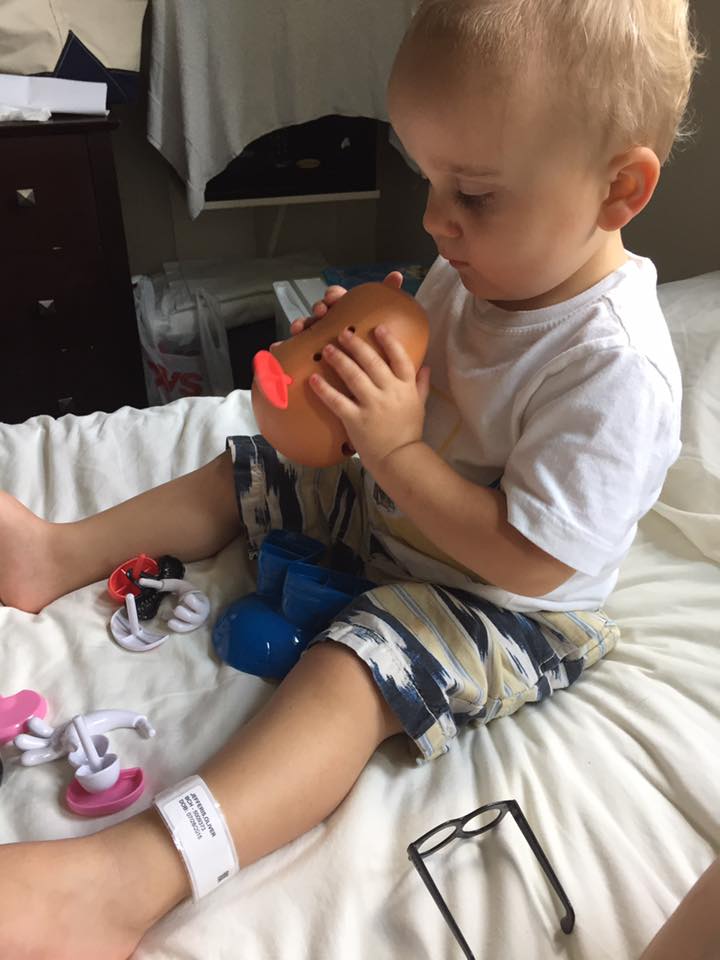 We were in the hospital for about seven hours that day. They said had we arrived any later, Ollie likely would have been admitted for one night. With children his age, with a history of delayed reactions, they like to keep a close eye on things in case of a biphasic reaction. In some ways, I kind of wish we had been admitted. For some reason, Child Life did not come through at all and the doctor was very hesitant to let Ollie eat. Understandably, we had a cranky, bored, hungry toddler. The few toys in our backpack did nothing to entertain him and he quickly lost interest in TV.

Eventually, I gave up and took a trip to the hospital gift shop. I came back with a small lego set, a Curious George book, and an “I Dig Everything” Life is Good shirt. I’m a giant softie and I knew Ollie would be excited about the excavator on it. We made it through the day and went home just after dinner. That night we took turns staying up all night to watch Ollie. Looking back, this also makes me wonder why we didn’t ask for him to be kept overnight. I think only one of us would have been allowed in the room with him, which was likely some of it. In any case, we watched him during the night and headed home the next day.

We learned that Ollie really doesn’t do well with prednisone. The ED doctor prescribed three more days of it, but we stopped two days early, after consulting his allergist of course. The steroid REALLY impacted Ollie. He was barely sleeping and irritable. You could tell even he was frustrated with the lack of control over his over-tired body.

To date, this reaction is by far the most severe we’ve ever experienced with Ollie. He exhibited more of the tell-tale signs of anaphylaxis as things progressed. It taught us a lot about how quickly a situation can change. It may have felt like a lifetime but I know it was a matter of minutes. I also know how lucky we are. At times, I’ve questioned if my husband or I should have given Ollie epinephrine earlier. We were so close to the ER that we simply ran on. I know we both felt more comfortable with a doctor administering the EpiPen and I’m thankful the outcome was what it was.

In some ways I wish I would have done it myself. I’ve still never given Ollie an EpiPen and while I hope to never have to, that realistically will not be the case. No matter how vigilant we are with labels, calling, cleaning etc; at some point, he will likely experience anaphylaxis while with us. I wish that in the security of the lobby of the hospital, right outside the doors to the ED, I had given him the EpiPen so that I 100% know what it feels like. I feel confident doing it. We practice with the trainers quite often and soon plan to use an expired pen on an orange. There is still no substitute for the real thing. I’m an over-thinker. I may always question this but in the end, Ollie was OK and that is what truly matters.

This past year, all of Ollie’s numbers were too high to even consider a food challenge. Given the two experiences we’ve had so far, that was OK. We, of course, don’t want Ollie to become more allergic and want to do all that we can to help him outgrow allergies if he can, but my heart wasn’t ready for another food challenge just yet. We go back in August and will see where things are and if he qualifies for any food challenges in 2019. I’ll surely keep you posted. Have you had any experience with passing a food challenge after multiple fails? Passing the first time? Failing the first time? I’d love to hear from you! 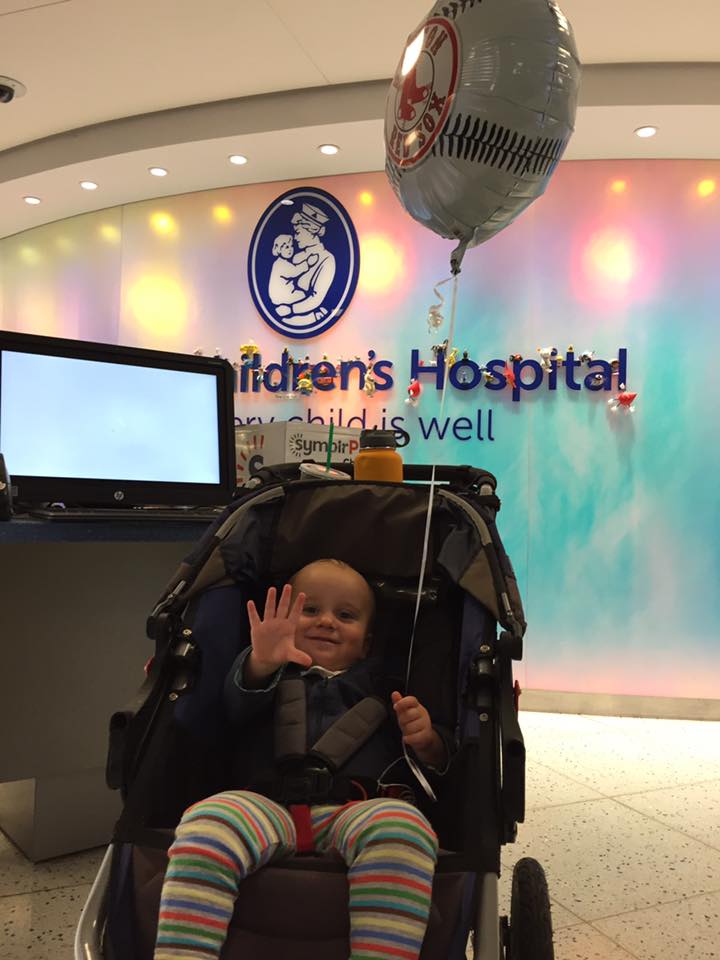 P.S. Thanks for sticking with me for this whole post! I know it was LONG.