I wish this post existed two years ago when we were considering our first food challenge. I found plenty of medical information on food challenges, but not a lot of personal experience. Being from a state where our main hospital doesn’t administer food challenges, there were no local food allergy parents to connect with on this topic.

what’s the first thing I wish I knew?

Food challenges take a long time to schedule. All of our challenges are in the Center for Ambulatory Treatment and Clinical Research (CAT/CR) instead of Allergy and Immunology. This started with baked egg because there was uncertainty if Ollie’s initial egg reaction was FPIES or anaphylaxis. With FPIES, epinephrine does not stop a reaction and most need IV fluids and anti-nausea meds. It is easier for CAT/CR to administer IVs. CAT/CR only conducts food challenge appointments on Thursdays. When undergoing a food challenge, you can’t be sick or have taken any antihistamines for a set amount of time before. We had to cancel twice due to illness and each time were pushed out months.

When our baked egg food challenge was finally here and we had a healthy toddler, I was incredibly anxious. We were mailed the recipe to prepare and set off to Boston with six, large, egg-filled muffins in hand. Walking to the hospital from our room at the Yawkey Family Inn, I wanted to turn and run a million times. When we arrived at the hospital, Ollie happily played, totally oblivious to our stress and what was about to happen (just as I’d want him to be, honestly). 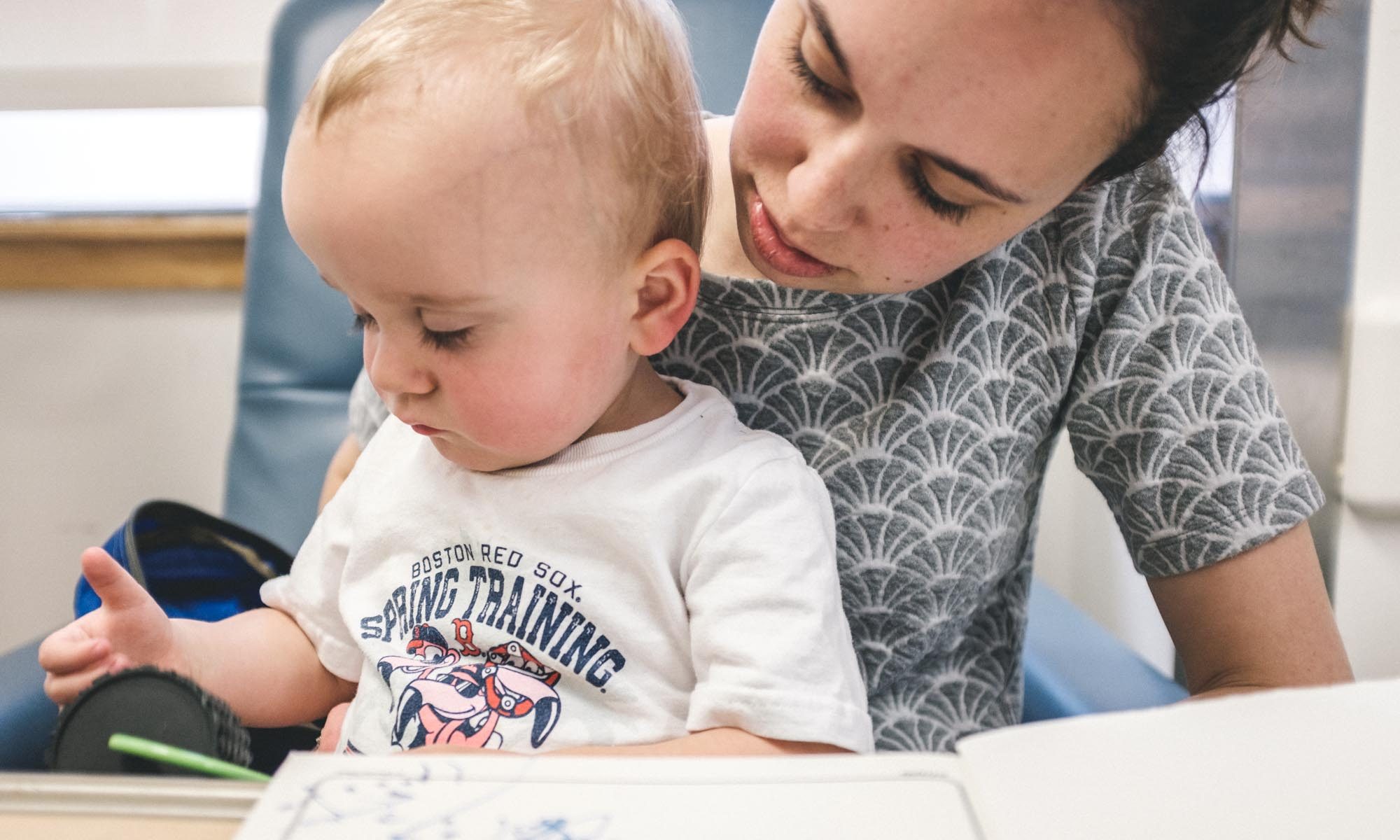 Everything started a lot slower than I expected. Two nurses looked over Ollie top to bottom; noting rashes (they had quite a list thanks to his keratosis pilaris), listening to breathing, and checking inside his mouth. One nurse asked us for two muffins and verified we followed the recipe exactly. Before cutting one into the required sizes, she complimented the blueberry muffins as one of the more appetizing food challenge muffins she’d seen in a while. After hearing stories of kids simply refusing to eat the food, my husband and I pulled out all the stops. Our boy loves all berries so blueberry was a safe bet and these even had some sugar sprinkled on top. I didn’t want to risk another reschedule and have totally wasted three days of precious time off from work due to refusal to eat.

Ollie was given one-eighth of a muffin and we all held our breath. I know some places start by skin pricking the child with some of the challenge food, but for us, it always starts with ingestion. He inhaled that first eighth. Not at all surprising. He’s always a good eater. The nurses checked him top to bottom right away and stuck with us for that first waiting period. After fifteen minutes, we presented him one-quarter of a muffin, which also disappeared astonishingly fast. Initial check? Totally fine.

During this next fifteen minute period, my husband and I noticed a red spot or two around his mouth and immediately paged a nurse back to the room. Ollie is a very sensitive child. It’s not uncommon for him to get a few mystery hives from time to time. The one to three dots usually go away after wiping down the area, which is exactly what happened that day. For the next twenty minutes or so, there was extensive deliberation about whether or not to continue the food challenge. In most cases, those three dots indicate a hard fail. Given Ollie’s hive history, everyone was less certain. I think we had five different doctors and nurses in our room trying to decide what to do. Ultimately, we came to the collective decision to continue.

does anyone actually know the answer?

I really appreciated the time everyone took to decide this. Two allergists came down from Allergy and Immunology to look at Ollie and speak with us. Everyone asked our comfort level with continuing. We asked for their informed and honest opinion. That’s the thing about allergies. They’re so far from black and white. There isn’t an answer in a medical textbook. In the end, the deciding factor was that no doctor wanted to call it a fail if a few quickly self-resolving spots weren’t out of character for Ollie.

When finally presented with his next “dose” of muffin, which was a repeat of the one-quarter step, Ollie was not interested in eating. At one and a half, he had a solid vocabulary and made it clear he did NOT want any muffin. We eventually convinced him to try while snuggled on my lap and almost immediately, things went wrong. He hadn’t even swallowed the second bite when he began to vomit. Looking back now, he was surely not feeling well but not able to express that.

The muffin was whisked out of the room as we cleaned Ollie (and the floor) up and continued to monitor him. Given the FPIES suspicion, an IV was administered for fluids and methylprednisolone. From there, our then naked boy developed a single spot on his back and Benadryl was added to his IV. For about 30 minutes, things were as calm as they could be. To this point, he hadn’t even cried. He gave the nurse an impressive side eye when she had to slap his arm to place the IV but that was it. Then Ollie began to cough and developed a slight wheeze. Out came the EpiPen and albuterol. Ollie laid on my lap as the nurse jabbed his thigh and counted to ten (this has since been changed to three), tears streaming down my face as Ollie cried from the surprise “big shot.”

you know what happened next?

Ollie’s condition improved astonishingly fast. His breathing regulated, he didn’t vomit again, and his skin cleared. In true champion fashion, he also stopped crying astonishingly fast and looked at me rather confused about my own tears. As a parent, you always want to protect your child. I can’t think of anything worse than watching your child suffer. The emotions of the day got the best of me as I held Ollie down on top of me for the EpiPen and made eye contact with my husband, who was clearly feeling the same amongst the giant collection of people that had swarmed into our room. 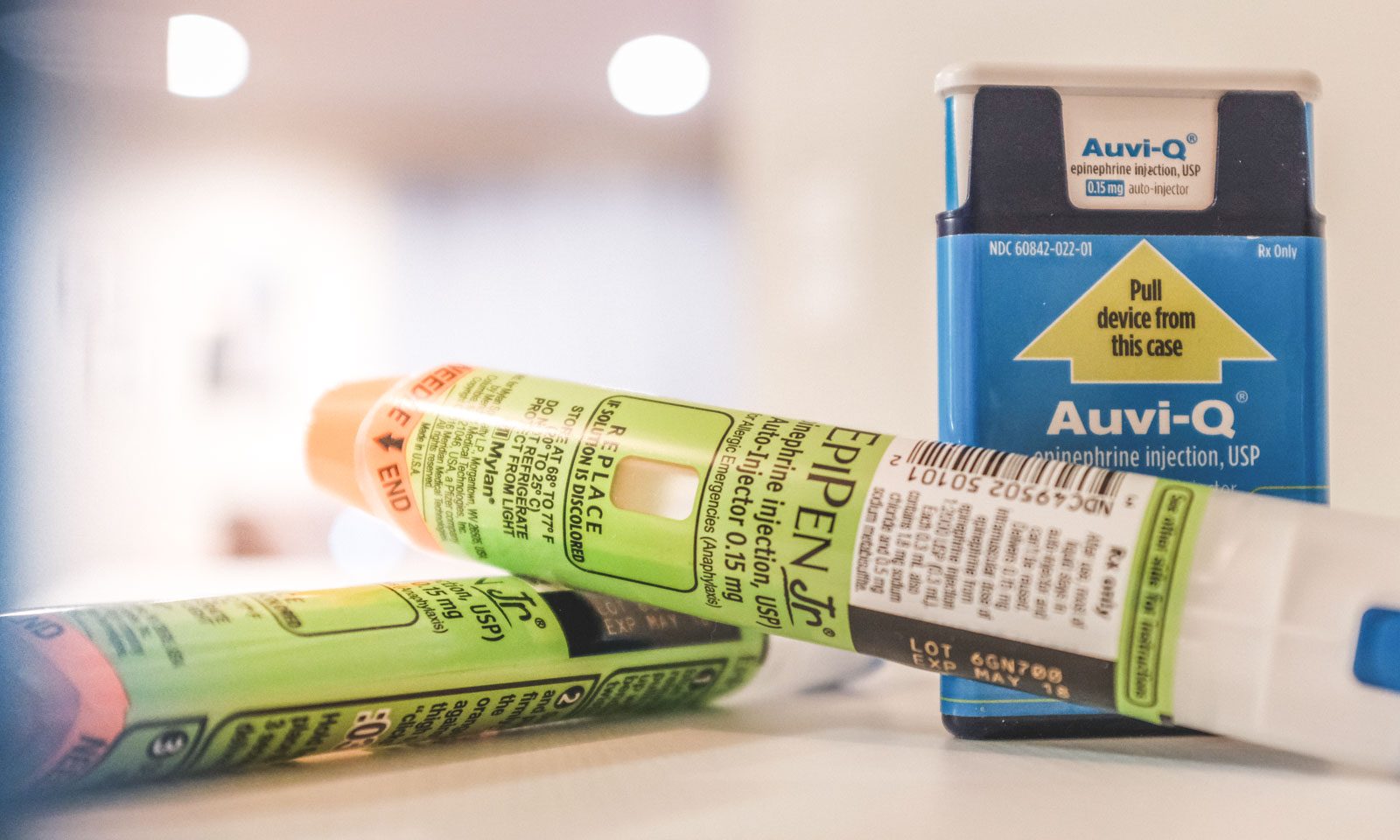 I don’t share all of this because I want you to feel bad or scare you. Despite the emotions and far from positive outcome, I am glad we completed the baked egg food challenge. To start, we now know that Ollie is anaphylactic to egg and not dealing with FPIES. There’s no other way to test this and it’s incredibly important to know as treatments are entirely different. We saw first hand how well epinephrine stops a reaction (though I’ll reiterate to always carry two as no reaction is the same and a second dose may be needed). As much as I’d love to never have to, I now feel more confident administering an EpiPen. I saw how well it works and how quickly Ollie recovers, physically and emotionally. By the end of our six-plus hours there that day, Ollie was back to being pals with the nurse who administered the EpiPen. She was pleased and impressed.

He took a solid nap and ate a full meal before we were discharged. Everyone also checked in with us as the parents more times than I can count. That night, Ollie woke up a few times with what we believe were stomach pains, but he never experienced a biphasic reaction. My husband and I took turns staying up, even just to watch him sleep. Ollie has a history of delayed reactions and as exhausting as it may be, we both feel better knowing someone is up and watching him during high-risk times. Thank goodness for coffee, right?

When food challenges were first brought up, I was honestly terrified. I read this case and almost wrote them off completely. We carefully weighed the options with Ollie’s team of doctors and clearly came to the decision to move forward. We’ve since gone through a second food challenge, baked milk, which I’ll share about soon. I’m hoping that sharing our experience helps another food allergy parent make the best-informed decision for their family. I appreciate talking with other food allergy parents about their experiences. As we continue to explore the latest in treatment and testing, I’d love to hear from you.